A complete Angular components library of Angular-native UI controls, Material-based UI components, including the fastest Angular data grid and 60+ high-performance charts! Compatible with Angular 15 and built to be enterprise-grade. Kickstart your next project with our drag and drop WYSIWYG App Builder for the fastest way to deliver high performance Angular apps. 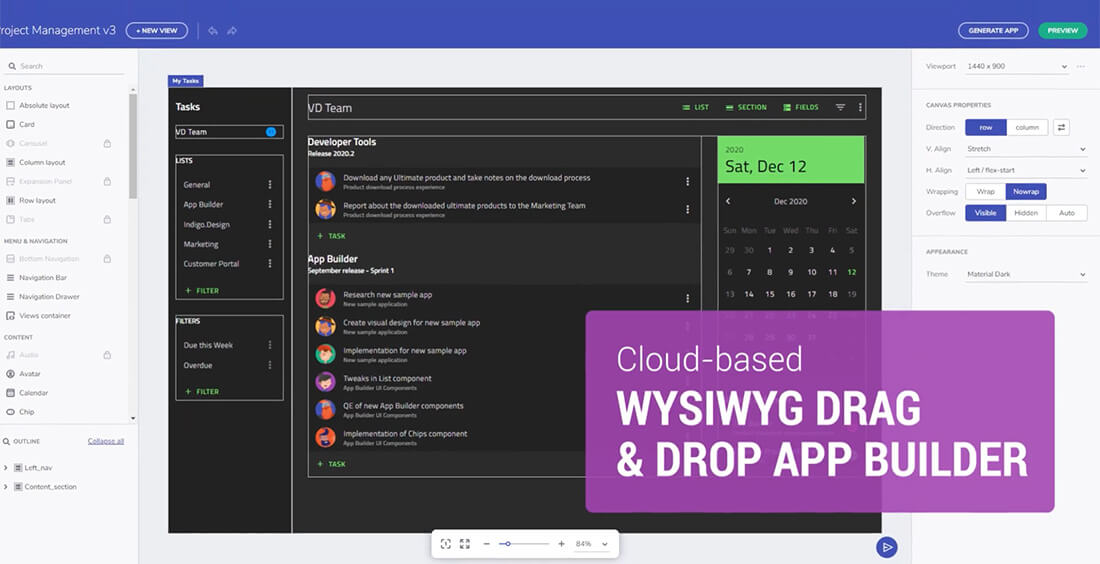 App Builder™ is a new cloud-based WYSIWYG drag & drop IDE that eliminates the complexity of user interface design and development so you can build business apps faster than ever before. Choose from a library of pre-built app templates or responsive screen layouts or drop in a Sketch or Adobe XD file. Then customize with a toolbox of 60+ UI controls and 65+ charts to kick-start your next digital product design!

Build expressive dashboards, apply deep analytics, and render millions of data points with 60+ real-time Angular charts. Including the most asked for financial and category charts, Ignite UI for Angular fulfills your fintech and business needs.

An Angular Chart for Every Occasion

Your Angular charts shouldn’t just be fast; they should be all-encompassing. With every common category chart type – bar, line, column, area, pie, and more – you can visualize your data the way you prefer. In need of financial charts? With Ignite UI’s Angular components, we offer the same features you come across with Google Finance and Yahoo Finance charts.

App Builder is designed to hyper-accelerate your app dev process. With a full toolbox of 60+ Angular UI controls, starter layouts, templates and full apps, and integrations with design tools like Sketch and Adobe XD, you can design, build and deliver applications faster than ever before.

Optimized for Speed and Performance

Angular components are written for optimal file size, so we do not impact the time-to-screen of your applications. We enable fastest Angular grids and charts – in the smallest package possible.

We are “native Angular Material components” – we do not require jQuery; we do not make you install any 3rd party dependencies that would make your app components non-Angular compliant.

We do not limit how and where you deploy your app – any country, any locale with full localization support across all components and Angular controls, including support for right-to-left text and bi-directional text in components.

Follow our Angular components dev process, submit issues or ideas, review specs, and track our progress - all on Github. We are 100% transparent in our component development process.

We work when you do – 24x5 support across all major regions. We do not stop with Phone, Chat and Forums, we have with technical solution consultants to help solve your toughest problems.

Leverage these helpful resources to learn how to build better web apps, faster.

Everything you need to get started with your next Angular project!

Save $200 per user at checkout for multiple users
No multi-year discounts available.
Buy Now
Best Value
$0 per developer, royalty-free subscription

Save $200 per user at checkout for multiple users
No multi-year discounts available.
Buy Now
Great Value
$0 per developer, royalty-free subscription

Save $200 per user at checkout for multiple users
No multi-year discounts available.
Buy Now
At Infragistics, we are dedicated to providing our customers with the best products and solutions on the market. We are constantly working hard to...
Angular is the most popular front-end development tool to date. Yes, it’s a little bit complex to learn, but as a top front-end programming l...
Glad to announce that today we’re shipping tons of UI/UX upgrades with the latest Ignite UI 22.2 Release. Extending your favorite UI library,...

What is Angular Material?

Material is an open-source design system created by Google designed for apps targeting the Web, Android, iOS or Flutter. Based on components that back up the design system, developers have a starting point to build out the user interface of their apps. Infragistics Ignite UI for Angular is built on top of the Material design system. Angular Material include guides, specifications, and examples for:

Like any good design system, Angular Material is meant to be adaptable. It is a system of guidelines, components, and tools that support the best practices of user interface design.

What are Angular Components?

When you create an Angular component, there are three files:

When an Angular app loads in your browser, you are looking at a “View” in Angular. That “View” is made up of one or more Angular components (usually more than one). In the Angular application, as a user navigates pages, or interacts with different components in the view, the Angular framework takes care of creating, updating, or destroying components. The component itself can respond to those events occurring in the application lifecycle, letting the developer write code that reacts to events in the component’s lifecycle.

How to Use Angular Components?

You can use an Angular CLI command to generate a component using this command:

This command will generate ProductComponent as shown below:

A component is a class decorated with the @Component decorator.

There are four steps to create a component:

As you can see, the generated ProductComponent consists of:

What is CLI in Angular?

A command line interface in Angular is a tool launched from a Command Window (Terminal on Mac, or Command Prompt / PowerShell in Windows, or a Terminal Window in Visual Studio Code.

To install the Angular CLI, make sure you have NodeJS installed from https://nodejs.org/en/download/. Once installed, open a Command Window and type:

Using a the Angular CLI (Command Line Interface), you can use templates using Angular Schematics from different commands that will generate all or a part of an application. The Angular CLI from the Google team is the fastest way to generate the structure and dependencies of an Angular application. A schematic is a template-based code generator which includes instructions and logic to add or modify code from a code generation process.

The Ignite UI CLI from Infragistics goes a step further than the Angular CLI. While still based on templates using Angular Schematics, the Ignite UI CLI can add user interface components like Charts, Data Grids, and even entire application scenarios to a new or existing Angular application. You can even create your own custom templates based on your team or business need to accelerate app development and generate code in seconds.

To get started with step-by-step instructions using the Angular CLI and the Ignite UI CLI, click here: https://www.infragistics.com/products/ignite-ui-angular/angular/components/general/getting-started

What are directives in Angular?

Angular Directives create DOM elements and change their structure or behavior in an Angular application. There are three types of directives in Angular:

What is Ignite UI for Angular?

Why should I choose Ignite UI for Angular controls and components?

Ignite UI for Angular is a complete library of user interface (UI) components for building data-rich and responsive web apps in Angular, including 100+ data charts, grids, and components.

How often Infragistics release update to their Angular UI Components?

How much does the Ignite UI for Angular product cost?

Our Angular components are included as a part of our Ignite UI bundle. A single developer license starts at $1,295 USD for a one-year subscription, including one year of standard support and updates. We also offer discounts for multi-year licenses. Please refer to our Pricing page for more information on pricing.

How do I deploy an Angular app with the Ignite UI for Angular Components?

Can I deploy an application that uses Ignite UI for Angular components to multiple customers?

Yes, you can deploy an application that uses Ignite UI for Angular components or Angular controls to unlimited clients. With the flexibility of our plans, we only license on a per-developer basis and do not charge any runtime, royalty, or deployment fees.

Where can I find Ignite UI for Angular samples?

The team at Infragistics maintains a comprehensive library of Angular code samples which you can access here and see how a simple new Angular project like an Angular Grid looks like. Also, there is a library of sample applications, including team collaboration apps, e-commerce, travel, and more. You can explore the Angular sample apps here.